We have been very busy learning about SURVEYS, VOTING, and DATA COLLECTION this week. Coincidentally, there is a municipal election going on right now and some of the voters will be heading to our school on Saturday!

Our first work involved looking at the two surveys we have done on our Edublog: Favourite Walking Stick Insect and Favourite Pet. We found out that the number of votes in our survey doesn’t actually tell us how many PEOPLE voted. (It’s a good thing that government voting keeps track of the names of people!) We could tell, however, that not everyone in the class voted for the first survey, because there were only 14 votes. The second survey had 31 votes, but we found out that some people voted twice and some people didn’t vote at all. Pink Winged Walking Sticks were the favourite stick bug and dogs were the favourite pet.  We looked at which came second, which came last, and made some comparisons between the choices.   There was a lot of GOOD MATH going on!!!

FINALLY, Mrs. B. let us get down to the exciting activity of giving our hamster a name!

Take a look at our TAGXEDO of Hamster Names!

In our first round of voting, we picked our favourite 3 or 4 names. 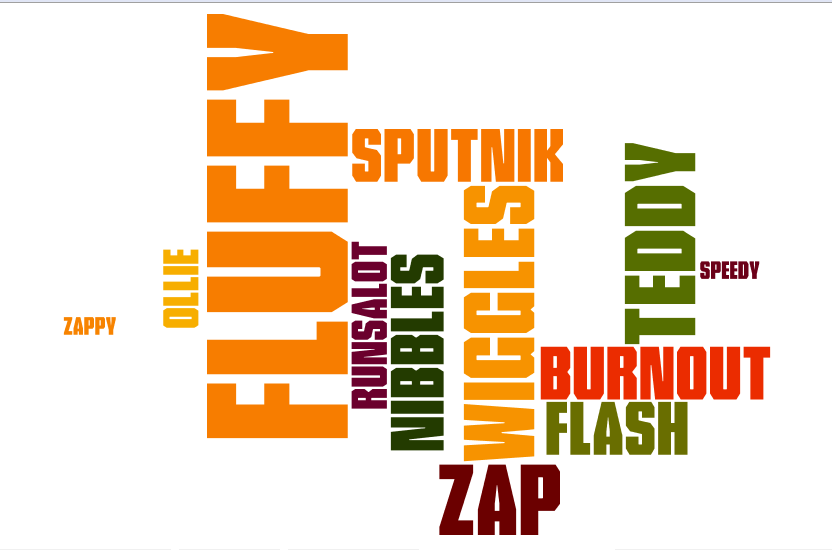 Then we voted again and ended up with just 4 names:
Fluffy, Teddy, Wiggles, and Zap.
(Mrs. Boekhout’s favourite had been “Sputnik”, but this name didn’t make it into the final round.)

In the last round of voting, the winning name was

We hope our new little hamster
likes his new name!

This week we will have to be on our BEST “inside voices“… because we have a new class pet!  He will be nervous at first, even though Mrs. Boekhout has been working with him at home.  Mrs. Boekhout tried to pick the calmest one in the litter, but he most definitely has personality!  At first he was only allowed in the small cage, but once he got into his big new cage, this little guy turned into wildfire!

This week we will watch him carefully so that we can give him a good name.  It will have to be something spunky, that’s for sure!  He is only 2 1/2 months old, so he isn’t supposed to be given fruits and veggies yet. We will have to find out which “hamster treats” he likes.  He definitely enjoys sunflower seeds. 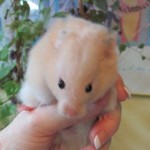 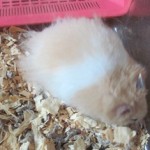 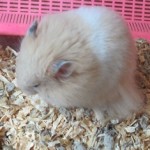 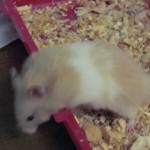 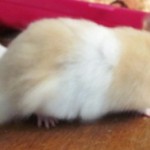 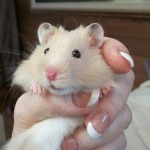 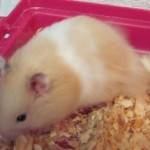 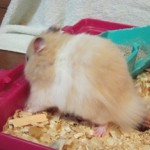 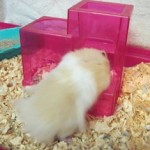 Here are two videos of our new little friend!

Introduction to our New Hamster – Video1

Now…
what SHALL we call him???

This week we had SOOO many things to choose from for our Journal Letters home!  Mrs. Boekhout could have FILLED the board!  In the end, however, we had to choose just ONE event, so that we could practice our GOOD WRITING SKILLS by ZOOMING IN and ADDING DETAILS.  We want our parents to be able to VISUALIZE the scene.

Here are some of the exciting events our class chose to write about:

the class pets, the class hamster, calendar time, reading the next chapters in our novel  “Class Pets”, the new grass lizards, Clues & Questions by the Special Helper of the Day,  getting to hold the Walking Stick insects, the Terry Fox run, birds coming to our bird feeders.  Whew!

Mrs. Boekhout is going to choose the Walking Sticks for this blog because… WOW!  Everyone was SO excited when each table got a blackberry branch with 4 different species of Walking Sticks on it!  Stick Bugs are known as Phasmids… Ghost Insects… because their camouflage lets them “disappear” into the branches and leaves.

Our Indian Sticks do a neat trick… they fold 2 legs forward and 4 legs backwards, until you can’t see anything but a little green twig!  The Pink Wings have tiny, delicate wings and can flutter away when disturbed.  The Bacculum Sticks are our longest sticks.  They like to wave their 2 front legs in the air, just as if they were saying “hello”!  The Thorny Sticks could win an “ugly bug” award with their brown thorny bodies!  The males are much smaller than the females and you can often see them having a piggy back ride around the bug tank!  All of our Walking Stick insects live happily in one big tank, and they all eat Blackberry leaves.  Blackberries are actually an invasive species here (even though the berries are soooo yummy!), so Mrs. B. doesn’t mind chopping them off for “bug dinners”.

Hope you had an exciting week too! 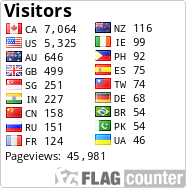